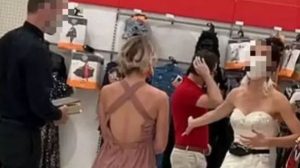 Having a surprise exchange of engagement vows in public could be understood but storming a man’s work place with a priest to force an unplanned marriage ceremony on him is pretty wacky.

A woman in a full wedding dress, accompanied by what appears to be a priest and a bridesmaid, has been filmed confronting a man that we can only assume to be her boyfriend, telling him that they’re getting married right there and then.

This incident took place in a Target supermarket somewhere in the USA, reports Ladbible. 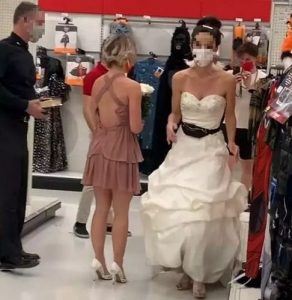 The bizarre incident was captured and shared on TikTok apparently by a customer present at the scene. The video was shared in two parts, one that shows the woman arriving at the store and storming about the place looking for her soon-to-be betrothed, who presumably works at the shop.

The second part of the video shows her angrily confronting said employee, telling him that he’d better commit to their relationship and get married right there and then, or it’s completely over for them as a couple. 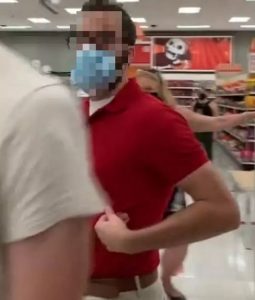 From what we can glean from the videos, assuming that this isn’t all a big prank or some sort of ridiculous stunt, is that the pair have been engaged for a few years by this stage, and one member of the relationship is starting to get just a little bit sick of waiting.

The woman in the wedding dress can be heard to say: “You put this ring on my finger two years ago and it’s time to do it or get out.

One wonders what Emily the bridesmaid was thinking while accompanying her friend to blackmail her boyfriend into an unplanned wedding.

The viral video shows the lady complaining until a stage, as the whole scene continues to unfold before a growing number of observers, the fiancé can be heard to say something that sounds like “could someone have told me then?”

As with a lot of these massively viral TikTok videos, no one can tell actually know what happened yet.

Maybe they have embarked upon a long and happy marriage together, or maybe he escorted her out of the store and told security to keep her out.

But from what was seen in the video it was not a successful plan at all.

Saxon is a prolific writer with passion for the unusual. I believe the bizarre world is always exciting so keeping you up to date with such stories is my pleasure
Previous 68-Year-Old Woman’s Steep Climb Up A Fort In Maharashtra Excites Twitter (Video)
Next Novel About Falling in Love With Coronavirus in Human Form Goes Viral