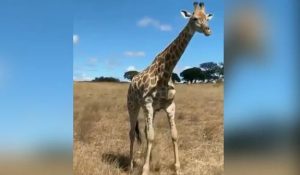 Giraffes are the tallest animals in the world with very long necks, allowing them to reach higher branches which other herbivores cannot. What happens when the animal wants to eat grass on the ground is a bit wacky. Here’s your chance to see that in this viral video which shows how giraffes ‘bend’ to reach grass. The video has left millions of people laughing.

The video was shared online by Twitter user ‘@DannyDutch’ and has gone massively viral on the microblogging platform. “I’ve never wondered how a giraffe eats grass before, but this is majestic!” he wrote while posting the video. In the short clip, a giraffe spreads its front two legs apart and bends its neck awkwardly to reach the grass. Having chomped down on a mouthful, it skips back to its standing position before repeating the whole process again. The sight is downright comical and is sure to make you laugh too.

I’ve never wondered how a Giraffe eats grass before, but this is majestic! pic.twitter.com/9pjbTugdKm

Since being posted on Twitter Monday, the seven-second clip has been viewed a whopping 9.6 million times- and counting. It has also garnered 2 lakh ‘likes’, and the comments section has been filled with pics, videos and GIFs of giraffes doing everyday things like eating, fighting and drinking water.

this is also how they drink water pic.twitter.com/697jk0tLCZ

Saxon is a prolific writer with passion for the unusual. I believe the bizarre world is always exciting so keeping you up to date with such stories is my pleasure
Previous Viral Pic Of Baby Removing Doctor’s Mask Becomes Symbol Of Hope
Next Indian Cricketer Dancing In Viral Vdieo Wows the Internet