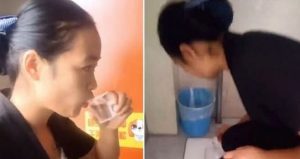 How far can you go to prove that you do your work well? Definitely not what this lady did to impress her bosses.

A cleaner has sparked debate in China after being filmed drinking water from a toilet she had brushed to prove her devotion to work, reports Daily Mail.

The sanitation worker offered to do so to show her higher-ups that she had done her job well, according to a report.

Her firm billed her as an ‘exemplary employee’ and praised her dedication.

The news came to light when a video of a young woman consuming toilet water went viral.

The 32-second clip shows the woman dressed in a suit scooping the liquid from a squat toilet with a small plastic cup before gulping it down in front of several people.

She then explained that it was a way for her to encourage herself to work harder and harder.

The spectators, who appeared to be her supervisors, applauded to the woman’s words.

The footage is reported to have been filmed in a fertiliser company in eastern China’s Shandong Province. It has led to heated discussions on Chinese social media platforms, with people debating over the necessity of the employee’s behaviour.

One Weibo, the Chinese equivalent to Twitter, one critic claimed that it was not appropriate for the company to promote such behaviour during the COVID-19 pandemic.

Another person wrote: ‘Ask the bosses to join in.’

A third observer believed that the woman had been forced to do so to meet the company’s cleaning target. ‘It was so hard on the cleaner,’ the person commented.

Others claimed it was ‘insulting’ for the supervisors to let their staff drink water from the toilet.

While tap water is not safe to drink in China, the company insisted that the water in its toilets was suitable for ingesting.

It also claimed that the staff member had done so out of her own will.

It suspected that the footage had been uploaded to the internet by a company client who found Ms Luo’s action ‘curious’.

A spokesperson told the outlet that Ms Luo had drunk toilet water for nearly two years after initially ‘breaking through her psychological barriers’.

The spokesperson claimed Ms Luo intended to encourage herself with the action.

The company urged all staff to learn from Ms Luo. It said: ‘She is our example. [By doing so, it] shows she does her job to the highest level.’

Saxon is a prolific writer with passion for the unusual. I believe the bizarre world is always exciting so keeping you up to date with such stories is my pleasure
Previous Brazilian Senator Caught Hiding Cash Between His Butt Cheeks: Police
Next Horrifying Video Shows Python Coiled Around Woman’s Leg