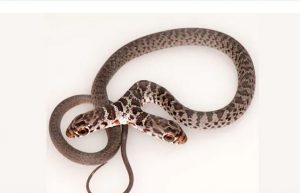 Kay Rogers resides in Florida with his family. Their pet cat often strolls out and brings them “presents” from outside all the time. But what the cat brought this time stunned the entire family. It was a two-headed snake.

“This day, my daughter sent me a message: ‘Mom, she brought in a snake and it has two heads,'” Rogers told WFTS Tampa Bay. “I think this tops it, but she’s an adventurous cat, for sure.”

The cat, named Olive, used the doggy door to drag the snake inside the family’s Palm Harbor home and placed it proudly on the living room carpet. It was only when Ms Rogers’s daughter, Avery, took a closer look at the snake did she realise that it had two heads. She named the snake Dos.

“Originally I thought my daughter was kidding when she said that. Then I saw him and was amazed, I had never seen anything like that,” Kay Rogers said to Click Orlando.

The Florida Fish and Wildlife Conservation Commission identified the snake as a southern black racer and shared pics on Facebook.

“This phenomenon, termed bicephaly, is uncommon but happens during embryo development when two monozygotic twins failed to separate, leaving the heads conjoined onto a single body,” they wrote.

The Commission added that two-headed snakes are unlikely to survive in the wild “as the two brains make different decisions that inhibit the ability to feed or escape from predators.”

Ms Rogers said the snake was uncoordinated, with both the heads pulling in different directions.

“Because of the two head thing, he’s very uncoordinated and couldn’t get to the food very well. It was like one head would see the food and try to go for it, the other would be going the other way and pulling him back,” she said.

The two-headed snake is currently being cared for by the FWC staff.

Saxon is a prolific writer with passion for the unusual. I believe the bizarre world is always exciting so keeping you up to date with such stories is my pleasure
Previous Little Girl High-Fives Priest As He Raises Hand To Bless Her (Viral Video)
Next Hospital Staff Dances For Ballet-Loving Girl Battling Cancer (Video)