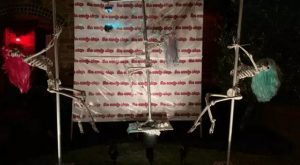 In the season of Halloween people come up with weird ideas of decorations that are jaw dropping. But what this woman came up with has sparked outrage and people are not accepting it even for Halloween.

A homeowner in Texas has sparked outrage after erecting a skeleton strip club on her front lawn as part of her Halloween decorations.

Though some people actually go the extra mile at this time of year, this woman’s idea is not going down well at all especially among residents of her neighbourhood. 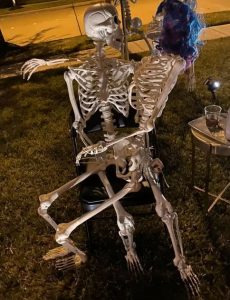 The whole display features three stripper skeletons in exactly the kind of positions you’d expect to find real strippers – so I’m told, anyway – along with a host of other ghoulish characters.

The woman also gave attention to details. She even added in a special skeleton security man complete with a hat and a guest list, with his arms outstretched as if to say ‘if your name’s not down, you’re not coming in’.

There are punters too – one wears a pair of gold sunglasses and is waving a fake dollar bill towards the bony dancers, while his beer sits beside him on a nearby table.

It’s incredible, and whilst Nava’s mates have described it as ‘creative and clever’, not everyone is so taken with the seasonal display. 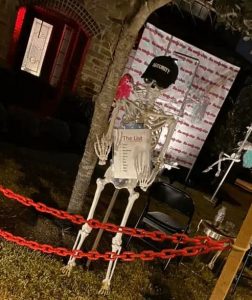 The local homeowners’ association has told her to get rid of it, branding it obscene.

Naturally, Nava is not happy with the decision. In fact, she sees it as an infringement on her freedoms.

She told local media outlet WTNH: “I believe we live in the greatest country in the entire world.

“And we do have the right to self-expression and creativity. And this is my way of being creative and having an outlet. There’s no harm. I’m not hurting anyone.”

There is – however – a twist to the tale.

While the homeowners’ association has demanded that she take down the display, it has also given her 30 days to do so, by which time Halloween will be long gone, so she can be pretty happy about that outcome.

This also gives her a stay of execution while she plans what to put up for Christmas. She might also come up with another weird idea, who knows?

Saxon is a prolific writer with passion for the unusual. I believe the bizarre world is always exciting so keeping you up to date with such stories is my pleasure
Previous Mum Accidentally Donates Wrong Bag Containing Sex Toy To Charity Shop
Next Model Fixes Phone In Back Pocket To Record People Staring At Her Bum (Video)