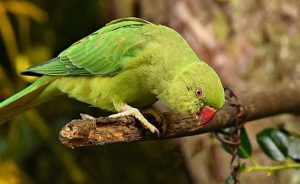 This is definitely a good way for a pet to pay back a nice owner.

A man in Australia survived a devastating house fire thanks to his pet parrot. Anton Nguyen had been fast asleep when his house caught fire in Brisbane on Wednesday, reports BBC.

Luckily for him, his parrot raised an alarm even before smoke detectors were activated, giving him enough time to rush out of the burning place. Mr Nguyen said he did not hear the smoke alarms go off.

“I heard a bang and Eric – my parrot – he started to yell so I woke up and I smelled a bit of smoke,” he told ABC News.

“I grabbed Eric, opened the door and looked to the back of the house and saw some flames.

“And so I’ve grabbed my bag and took off and bolted downstairs.”

“There was a gentleman asleep at the time,” he said.

“He heard a large bang and his parrot, Eric, actually alerted him to get out of the building and they both got out fine.

Firefighters were able to contain the fire from spreading to other houses. It is not clear what caused the fire and investigators are now examining the case.

This is not the first time that a pet has saved its owner from imminent danger. Last year, an 11-year-old pit bull saved the lives of her family by sniffing out a gas leak in the basement of their home in Tuckahoe, New York.

Saxon is a prolific writer with passion for the unusual. I believe the bizarre world is always exciting so keeping you up to date with such stories is my pleasure
Previous US Town Elects French Bulldog As Mayor
Next Man Marries Himself After Fiancé Breaks Up With Him (Video/Photos)