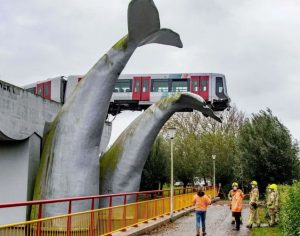 A train driver’s life was saved by a giant whale tale after his train crashed through the barriers at the end of the track.

The train plunged straight through, and would have ended up in the water below if the artwork hadn’t broken its fall.

Nobody else was on the train and the driver was able to escape to safety himself.

The carriage is now still suspended 10 metres above a footpath at De Akkers metro station in Spijkenisse, near Rotterdam. 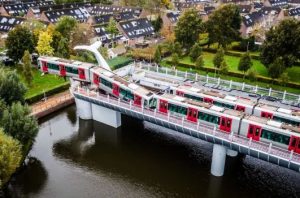 A local safety board spokesman told broadcaster NOS: ‘We are trying to decide how we can bring the train down in a careful and controlled manner.’

The sculpture, made of polyester, was made by Maarten Struijs and placed in the water at the end of the tracks in 2002.

A neighbour said: ‘We woke up at a quarter past twelve. There was a blow of two to three seconds.

‘Then I suddenly saw that the tail was occupied. I thought: hey, something very strange is going on.’

It is not yet clear what caused the train to overshoot the track.

Saxon is a prolific writer with passion for the unusual. I believe the bizarre world is always exciting so keeping you up to date with such stories is my pleasure
Previous Ghanaian Lady Bites Off Joy Stick Of ‘rapist Who Asked For Mouth Action’
Next Worker Bathes In Milk At Dairy Plant, Arrested After Video Goes Viral