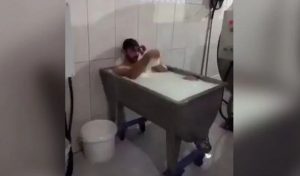 What needs to be explained is whether this man has the impression that taking a milk bathe purifies the soul.

A dairy plant in Turkey was shut down after footage emerged online of a worker taking a dip in a vat of milk.

The footage, which went viral on the video-sharing app TikTok, shows a man sitting in a huge cauldron full of milk, using a mug to pour it over his head.

According to Hurriyet Daily News, the video was recorded at a dairy plant in the Central Anatolian province of Konya.

The man taking a dip in the milk vat was identified as Emre Sayar, and his video was uploaded on TikTok by Ugur Turgut. Both the men have been arrested after the video went viral.

The footage sparked outrage on social media as it quickly spread across different platforms. However, the dairy plant has said that Turgut, whose contract with the company was terminated after the incident, did not take a dip in milk but rather a mixture of water and cleaning fluid.

On the other hand, Konya Agriculture and Forestry Manager Ali Ergin launched an investigation into the incident and shut down the factory, reports news website Haberler. He said the plant was banned from operating “due to circumstances that put human health at risk” and also issued a fine.

Saxon is a prolific writer with passion for the unusual. I believe the bizarre world is always exciting so keeping you up to date with such stories is my pleasure
Previous Train saved from disaster by giant whale after crashing through barrier at end of track
Next Watch Hilarious Moment A Dog Gets Caught Stealing Popcorn