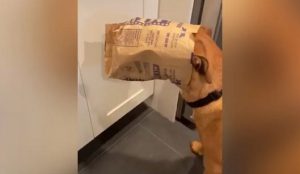 You need to lighten up your day with this video of “Bear” the dog, who was caught stealing popcorn red-handed.

This hilarious video shows how Bear reacted when his owner walked in on him with his head stuck inside a popcorn bag.

The video was originally uploaded on TikTok, and then made its way to Reddit where it is winning hearts.

The short clip opens with a shot of the dog with his head inside a bag of popcorn. “Bear!” says his human, walking towards him. The dog pretends to ignore him, standing completely still.

“Dog steals popcorn,” reads the caption alongside the hilarious video. Watch it below:

Since being shared on Reddit, the funny dog video has been upvoted over 1,200 times, collecting a ton of amused comments.

“You can’t see me therefore I’m innocent,” wrote one person in the comments section.

“Seeing the bag crumple just made me giggle,” said another, while a Reddit user branded the video “utterly adorable”.

Some people also rushed to the dog’s defense, saying that he wasn’t stealing but simply wearing a mask amid the coronavirus pandemic.

Saxon is a prolific writer with passion for the unusual. I believe the bizarre world is always exciting so keeping you up to date with such stories is my pleasure
Previous Worker Bathes In Milk At Dairy Plant, Arrested After Video Goes Viral
Next What happened to this ‘smart’ monkey must make you laugh! (Viral Video)