Home / Uncategorized / What happened to this ‘smart’ monkey must make you laugh! (Viral Video)

What happened to this ‘smart’ monkey must make you laugh! (Viral Video) 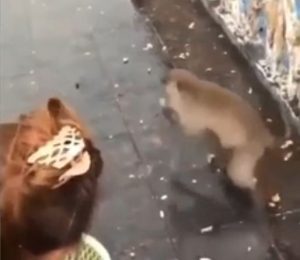 You don’t usually get videos that make your day like this one. This monkey looks very mart as a collector but what eventually happened to it as it tries to run away from the scene must bring out the lighter mood in you. The monkey has become an internet sensation even though many viewers must have felt for the poor animal after a took a hilarious fall.

This video has gone viral after it was shared on Tiktok. The video shows a monkey picking up what looks like popcorn from the floor.

The video also shows someone who probably had deliberately thrown the popcorn to the floor for the monkey to take but the monkey seems to be playing smart by collecting the items and running away as if the owner didn’t give consent.

Unfortunately the drama ended up on the wrong side for the monkey as it took a heavy hilarious fall due to what looked like slippery floor.

What a skillful collector from funny

Saxon is a prolific writer with passion for the unusual. I believe the bizarre world is always exciting so keeping you up to date with such stories is my pleasure
Previous Watch Hilarious Moment A Dog Gets Caught Stealing Popcorn
Next Shocking Video Shows Tigress And Cubs Walk Up To Person Filming Their Video