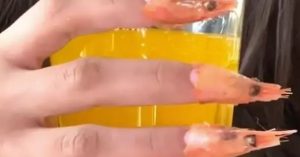 A nail salon that has previously come up with some wild designs – including, ahem, penis nails – has once again shocked followers with another outrageous artwork, this time using real prawn heads.

LA-based salon Nail Sunny – which originated in Russia – regularly push the boundaries when it comes to outlandish nail art, but it’s their prawn-art manicure video that is copping some major backlash.

Followers have dubbed the bizarre art as ‘disgusting’. Anyone who has bought some prawns and devoured the meat will know the stench of the shell and head is rank.

Nail Sunny has uploaded a video showing how they make their divisive nail art.

The clip begins as any other manicure would as the technician shapes the nail and applies an adhesive. However, things quickly go pear-shaped after that. 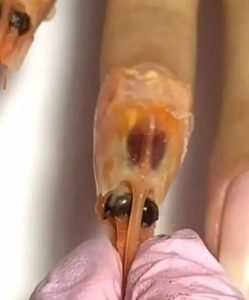 It then cuts to the technician beheading a prawn and scraping out the innards (while getting rid of all that delicious prawn meat – blasphemy!) and casually shoving the head of the sad-looking shrimp over the customer’s entire finger tip.

Some observers feel that using real prawn heads for nails feels like a bit of an overkill, and it seems the salon’s followers felt the same.

One Instagram user commented in disgust: “ANIMALS ARE WONDERFUL LIVING BEING AND THEY DESERVE RESPECT LIKE ALL OF US. Shame on you for not having empathy.”

Another said: “This could not be any more disgusting. Wtf who does this.”

A third added: “That’s the most disgusting thing ever why can’t you just do normal nail designs???”

It’s certainly not the first time Nail Sunny has raised eyebrows with their ludicrous designs.

Saxon is a prolific writer with passion for the unusual. I believe the bizarre world is always exciting so keeping you up to date with such stories is my pleasure
Previous Watch Bizarre Video of Man In Giant Rat Costume Riding Subway
Next Israeli Jewelry Company Makes World’s Most Expensive Face Mask, Costs $1.5 Million