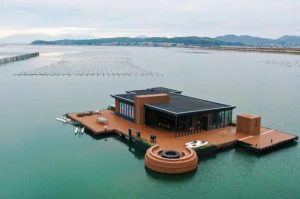 A Chinese entrepreneur spent a year and only 400,000 yuan ($61,000) building himself an awesome, 600-square-foot floating home on the coast of Fujian province.

The young entrepreneur identified only by his nickname, “Coastline”, grew up near the sea, and spent most of his time fishing and taking in the beautiful sunsets of Dongshan County, a large island in the South China Sea.

Coastline spent most of his free time sea fishing, and always drove his friends crazy with his praise of the sea and the carefree lifestyle of the fishermen of Dongshan. One night in 2018, while drinking with his good friend, architect Dong Xinmeng, he started talking about how great it would be to have a floating home, so he could fish and drink beer all day. One drink led to another, and by the end of the night, they had decided to make his dream a reality. 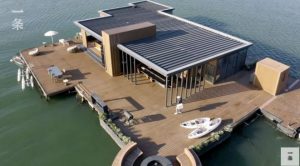 Dongshan County has a long history of sea fishing and aquaculture, so Coastline and his architect friend took inspiration from their large rafts to build the buoyant base of the mansion. The two friends originally planned to move together into the floating mansion, and since land wasn’t a problem, they decided to make it 600 square feet in size. That however made it too big to build on land, as Dongshan doesn’t have a large enough port. At first, they worked in the shallow waters of a dock, but the tide was giving them problems, so they dragged the platform to the open sea and started work on the home itself.

Building a home on a floating base turned out to be more problematic than Coastline had imagined. The platform bobbed up and down as workers moved on it, and the strong winds didn’t help things either. The sturdy structure was built using steel, and even though Coastline wanted to incorporate as much glass as possible into the design, he finally understood that he had to sacrifice looks for sturdiness and reliability. 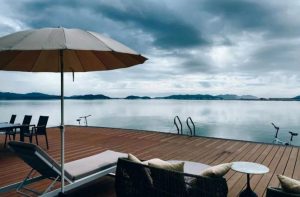 Coastline and his team of workers spent about a year trying to solve the matter of electricity. They originally hooked up the place to a nearby hydropower installation, but fishing boats passing by routinely unplugged the cables. Over time, the Coastline negotiated with the fishermen to pay attention to his cables, and even though his cables stretch for 3km all the way to a dock on shore, they haven’t been unplugged in a year now.

Coastline’s amazing floating home is held in place by 16 metal anchors, each weighing about a ton. If the owners ever want to move it, all they have to do is raise these anchors and have a powerboat tow the mansion to its new location. 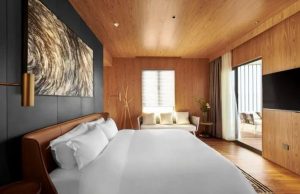 At 600 square meters, this amazing floating home has plenty of both indoor and outdoor space. After it was completed, in 2019, Coastline started using it as a vacation place where he could be alone, fish all day and just reflect on his life and his future plans.

The floating home, named Haixi, offers a 360-degree view of the sea, and is located in a calm bay, about 500 meters from the coast of Dongshan. It cost Coastline and Dong Xinmeng only 4 million yuan ($61,200), which he considers a bargain. The price per square meter is under 7,000 yuan, and considering prices in bustling cities like Xiamen can reach 80,000 yuan per square meter in some places, Coastline couldn’t be happier with his investment. 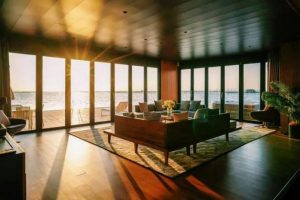 Coastline and Dong Xinmeng set out to create the floating sea home for themselves, but as they started sharing photos of it on social media, friends started asking them to come and experience it for themselves. Coastline was too embarrassed to say no, but his friends in turn brought their own friends, and word of this beautiful retreat at sea, off the coast of Dongshan started spreading.

In September of this year, Coastline opened his floating mansion as China’s first floating hotel. He didn’t partner up with any booking services, as he only wants to rent the place out to people that hear about it from his own acquaintances. Even so, he was so inundated with requests, that he now has to reserve a few days for himself months in advance, if ever wants to visit the place himself.

Saxon is a prolific writer with passion for the unusual. I believe the bizarre world is always exciting so keeping you up to date with such stories is my pleasure
Previous Watch! Man Drops iPhone From Plane. It Survives, Records Video Of Fall
Next Watch as Elephant Poo Explodes In Vet’s Face As He Helps Solve Animal’s Constipation (Video)