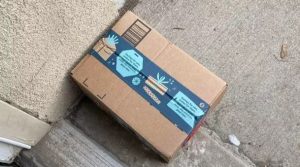 A woman who became upset that delivery parcels have been missing in front of her house for a long while decided to play a fast one on whoever the thief was. Her hilarious plan worked.

Laurie Pringle decided to take matters in to her own hands after she noticed that parcels kept going missing over a three-year period.

Fed up of boxes going missing from the outside of her property in Hamilton, Canada, Laurie decided to fill an empty cardboard box with the remains from a cat litter tray and put it on her doorstep in a bid to catch the culprit.

Surprisingly, the parcel was taken from her doorstep within 40 minutes by someone who was caught on Laurie’s front door Ring camera. 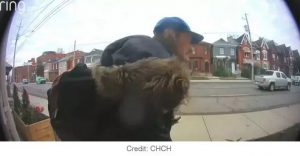 Speaking to CHCH, Laurie said: “I just happened to be cleaning the cat litter and I thought well this would work and so I just threw it in and off I went. Little did I know that it would take 40 minutes for someone to pick it up.”

Laurie explained how she leaves instructions for Amazon delivery staff to ring her video doorbell when they deliver a parcel but some don’t do this.

Speaking to Narcity, she added: “I live on a very busy downtown street. My front door pretty much opens out onto the sidewalk. I’ve had a number of packages stolen in the three years I’ve lived here.

“As a result I have a very clear label for all my Amazon packages, indicating that they should ring my video doorbell. A couple of the couriers that Amazon uses almost never read the label, so that results in my packages being stolen fairly often.”

LADbible has contacted Amazon for a statement.

In the UK, a staggering 12 million Brits fall victim to parcel theft, according to new research from ADT Fire & Security.

Parcel theft raises exponentially in major cities, with over 41 percent of people living in London having experienced theft first-hand.

And with 45 per cent of us relying more on online shopping and deliveries in the wake of the coronavirus crisis, it’s more important than ever that we know how to keep our items safe and secure.

Saxon is a prolific writer with passion for the unusual. I believe the bizarre world is always exciting so keeping you up to date with such stories is my pleasure
Previous Watch as Elephant Poo Explodes In Vet’s Face As He Helps Solve Animal’s Constipation (Video)
Next Parachuting Santa Claus Gets Tangled In Power Lines (Video)