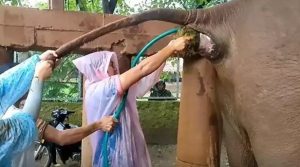 A veterinary doctor identified as Dr. Tom may love his job but what he experienced in the hands of an elephant he tried to treat of constipation is definitely not among the things he bargained for on the job.

The man had this hilarious but a little bit nasty experience when he was sent to treat constipated elephant Lana at the Elephant Nature Park in Chiang Mai, northern Thailand. He ended up covered in excrement.

The sizeable mammal was suffering with a severe case of blockage, which can be fatal if left untreated.

Dr. Tom came to the rescue, but after removing a huge portion of poo trapped in her anus, the floodgates opened and the caring vet was hit square in the face by a yellowish deluge. 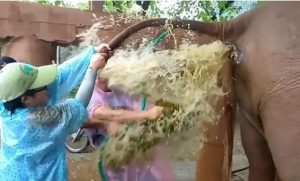 The hilarious – but also quite awful – clip was shared on Instagram, and has since being viewed over 45,000 times, with people impressed and disgusted in equal measure by what they witnessed.

But despite the horrific sight, many have praised Dr. Tom for doing his bit and relieving poor Lana.

Commenting on the video, one person said: “Oh wow, that’s a rough day at work… but so important. the relief that team brought to the elephant truly was life-saving.”

“Oh wow hahaha it’s so funny but so amazing what you have done to help this beautiful elephant! Well done!” praised another.

While a third chimed in with: “Love that dedication, doctor!!”

According to the Samui Elephant Sanctuary, Lana is now feeling much better since being treated. So it’s good to see that Dr Tom’s efforts were not in vain.

Definitely not one of the nicest days at work at all for Dr. Tom.

Saxon is a prolific writer with passion for the unusual. I believe the bizarre world is always exciting so keeping you up to date with such stories is my pleasure
Previous Creative entrepreneur builds 600-Square-meter floating sea mansion for himself (Photos, video)
Next Upset Woman Fills Delivery Box With Poo, Catches Thief Stealing It