Two Passengers Open Cabin Door, Slide Out Of Moving Plane With Their Dog 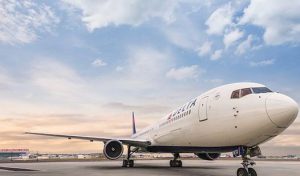 One of the passengers – Antonio Murdock – told told Port Authority police that his post-traumatic stress disorder was triggered on the plane. The 31-year-old and his companion, 23-year-old Brianna Greco, were arrested in the incident.

Brian Plummer, an eyewitness to the incident, told The New York Times that as Flight 462 began to move, Mr Murdock ignored a flight attendant’s instructions to sit and stood up saying that he had  post-traumatic stress disorder.

“If I sit down, I’ll freak out,” the man said, according to Mr Plummer.

He and his companion had also changed seats several times while the plane was preparing to depart, Mr Plummer said.

After the couple and their dog exited the plane, the aircraft returned to the gate and other passengers were deplaned, Delta spokesman Morgan Durrant told CNN. The passengers were accommodated on other flights and no one was injured in the incident.

Saxon is a prolific writer with passion for the unusual. I believe the bizarre world is always exciting so keeping you up to date with such stories is my pleasure
Previous Parachuting Santa Claus Gets Tangled In Power Lines (Video)
Next Dog Eats Family Christmas Turkey Alone, Collapses After That