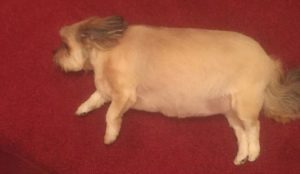 It is not a merry Christmas for this small dog after having what should have been a delicious turkey meal.

A dog has gone viral on social media for gulping down his family’s entire Christmas turkey before collapsing on the floor, unable to move.

According to The Sun, Bubba, a five-year-old Chi Apso, managed to get her paws on the turkey which was meant to feed three humans. On Christmas Eve, Bubba snuck into the kitchen and polished off the family dinner, which had been wrapped in foil and left under a dish towel on the kitchen counter.

The dog then collapsed on the floor, barely able to move after its large meal.

A picture of Bubba lying on her side has been shared thousands of times on social media. The photograph was posted on Twitter by owner David Barrett, who lives in Prestwick, Scotland, with his family.

“No chance has ma dog just scranned the whole turkey for tomorrow,” he wrote before sharing the picture of “the culprit”.

In Bubba’s defense, she did not scarf down the whole turkey. She left a shred of turkey breast for her owners too, according to Metro News.

The greedy dog did not suffer any long-term effects from her binge eating, but has now been put on a strict diet.

“She just couldn’t move. It was pretty big, a whole turkey breast,” David Barrett said. “My aunt had two turkeys so we got one of hers.”

Saxon is a prolific writer with passion for the unusual. I believe the bizarre world is always exciting so keeping you up to date with such stories is my pleasure
Previous Two Passengers Open Cabin Door, Slide Out Of Moving Plane With Their Dog
Next Woman Spends £8,000 On Herself And Didn’t Get Her Kids Anything For Christmas (Photos)