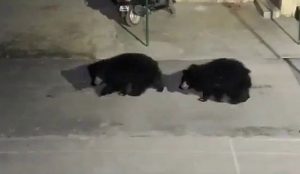 It could be they went there to report a minor dispute in their family or probably to bail a good brother. But I’m not sure any police man would gladly welcome such ‘complainants’.

Three bears were filmed walking into a police station in Chhattisgarh’s Kanker in a video that is being widely circulated online. Shared by IPS officer Dipanshu Kabra on Twitter, the footage begins by showing one cub walking calmly into the police station before it is followed by two others.

He also applauded the courage and patience of cops who were on duty at the time of the bear invasion, writing: “Salute to the bravery and patience of the soldiers on duty who, despite facing these conditions, put public service before themselves.”

Take a look at the footage below:

Since being shared on the microblogging platform, the video has garnered over 6,000 views and dozens of reactions.

“Soooooooo cute! Thanks so much for sharing this!” wrote one person in the comments section.

“Hopefully the inspection went off well,” another remarked.

One Twitter user said that bears are not an uncommon sight in Kanker while posting a video of three bears running away from a car.

Surely, only the brave must be living in Kanker.

Saxon is a prolific writer with passion for the unusual. I believe the bizarre world is always exciting so keeping you up to date with such stories is my pleasure
Previous Woman Accidentally Sets Her Hair On Fire While Singing With Boyfriend (Scary Video)
Next Watch Unbelievable Video of Two Huge Venomous Snakes Fighting