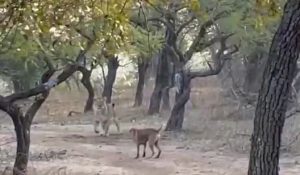 If you want to see what a brave dog really looks like you might have to watch this video.

This terrifying video that has gone viral online shows a fearless dog fighting a lioness. A video of the unusual fight was shared on Twitter by Indian Forest Service officer Parveen Kaswan. In the one and a half-minute-long clip, the lioness was seen chasing the stray dog as tourists on a jeep watched from a short distance away.

The video shows the dog barking furiously while running. Eventually, a fight broke out between the two animals from which the canine managed to walk away miraculously unscathed. As the lioness tried to approach it again, the dog charged and her, again barking loudly. It finally forced the big cat to retreat and was then filmed running away from the scene.

“Need this much confidence in life. Dog vs Lion,” wrote Mr Kaswan while sharing the clip. He also said that the encounter “highlights issue of stray dogs and wildlife interaction”.

“Lion just used as indicative. It’s a lioness to be precise,” Mr Kaswan clarified in the comments section.

Need this much confidence in life. Dog vs Lion. It also highlights issue of stray dogs & wildlife interaction. @zubinashara pic.twitter.com/lNu7X4ALm5

While some commented on the surprising outcome of the fight, others tweeted about the unusual nature of the encounter and the issue of stray dog and wildlife interaction that Mr Kaswan had touched upon.

Saxon is a prolific writer with passion for the unusual. I believe the bizarre world is always exciting so keeping you up to date with such stories is my pleasure
Previous Watch As Cop Removes 6-Foot Python From Home In India
Next Outrage As Indian Flag Is Spotted At US Capitol Attack (Viral Video)