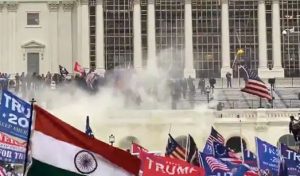 This is really one event no one would want their country to be identified with, including enemy countries. So the outrage expressed by Indians is quite understandable.

The Indian tricolour was spotted among a sea of American flags during Wednesday’s Capitol Hill attack. The chaos unfolded as thousands of supporters of outgoing US President Donald Trump swarmed the Capitol Hill in Washington DC, bypassing security. The protesters ransacked offices, flipped tables, smashed windows and looted the building.

The violence began when thousands of pro-Trump protesters pushed into the East Front of the Capitol grounds, some waving Trump flags, some American flags.

One video taken at the scene shows an unidentified person waving an Indian flag waving alongside dozens of red and blue ones. While some protesters held up the American star-spangled banner, others waved blue flags proclaiming Trump 2024. The lone Indian tricolour stood out in contrast in this video shared by journalist Alejandro Alvarez.

Trump supporters have mounted the rafters in place for the inauguration. pic.twitter.com/2YKdzlH3iB

The video sparked intrigued as well as enraged reactions on Twitter as several Indians questioned what the Indian flag was doing at the US Capitol protests.

“Not the place where we’d like to see our Indian flag,” wrote one Twitter user who was among the first to notice it.

Not the place where we'd like to see our Indian flag 🙂🙂 https://t.co/Abtbth5j8K

BJP MP Varun Gandhi also took to the microblogging platform to wonder how the Indian flag appeared at the Capitol. “Why is there an Indian flag there??? This is one fight we definitely don’t need to participate in…” he wrote.

Why is there an Indian flag there??? This is one fight we definitely don’t need to participate in… pic.twitter.com/1dP2KtgHvf

Rajya Sabha member Priyanka Chaturvedi also criticised the presence of the Indian flag and wrote, “Don’t use our tricolour to participate in such violent & criminal acts in another country.”

Whoever is waving this Indian flag should feel ashamed. Don’t use our tricolour to participate in such violent & criminal acts in another country. pic.twitter.com/CuBMkq9Siu

Meanwhile, comedian Vir Das and several others took pointed digs at the person carrying the flag.

Dear random Indian dude waving Indian flag at the #CapitolRiots
Every large crowd IS NOT A CRICKET MATCH!

That’s an Indian flag supporting a protest aimed at dismantle American democracy. Any idea who these idiots are and why they feel the need to fly the Indian flag? pic.twitter.com/ZwZ7s2ZbR4

Four people have died during the violence unleashed at the Capitol. Supporters of Donald Trump swarmed inside the building amid a session of Congress to certify Joe Biden’s election win, leading to accusations that the outgoing US President was attempting to stage a coup.

Probably the person flying the Indian flag thought they were watching a cricket match, as observed by some critics. Lol !!!
(NDTV)

Saxon is a prolific writer with passion for the unusual. I believe the bizarre world is always exciting so keeping you up to date with such stories is my pleasure
Previous Fearless Stray Dog Fights Lioness In Jaw Dropping Viral Video
Next Watch As Leopard Strays Into Medical College In India