Watch As Leopard Strays Into Medical College In India 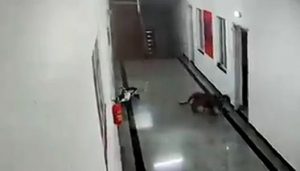 Even if this animal needed medical attention, no doctor would have been willing to offer such service, at least not in this medical college.

Surveillance camera footage that shows the leopard running into the hostel building was shared on Twitter by Indian Forest Service officer Parveen Kaswan. He initially identified the big cat as a black panther – the common name given to melanistic big cats – before adding that the leopard filmed here could have been non-melanistic too.

“A common leopard. With little dark complexion it seems,” he wrote. “Black panthers are also normal leopard only. Though melanistic. This could be non-melanistic also. In night.”

The footage shows the leopard running the length of a corridor and inspecting a door before going out the same way it had come in.

The video has been viewed nearly 8,000 times on the microblogging platform.

“Bagheera has come for admission,” quipped one person in the comments section.

Speaking to Udayavani, Dr Sanjeev, Dean of Chamarajanagar Medical College, confirmed the leopard sighting. As the Government Medical College is attached to a tiger reserve, leopards are often spotted on campus, the dean said.

College staff were witness to this particular leopard incursion on January 2.

Saxon is a prolific writer with passion for the unusual. I believe the bizarre world is always exciting so keeping you up to date with such stories is my pleasure
Previous Outrage As Indian Flag Is Spotted At US Capitol Attack (Viral Video)
Next Bride Marries Wedding Guest After Groom Changes Mind and Runs Away