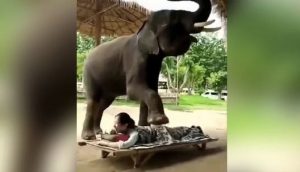 A video of an elephant massaging a woman’s back is currently going viral on social media. The video shows the woman lying on a low bed as the elephant uses its trunk and legs to apply pressure on her back. While the footage is not new – it has been doing the rounds of the Internet for at least two years now – it is going viral again after resurfacing on Twitter, once more shining a spotlight on this problematic practice.

According to The Dodo, using trained elephants to massage tourists has long been promoted as a fun activity in Thailand. And while the idea of having a jumbo press down on your back may seem terrifying to some, these elephants have been trained from an early age, and several visitors look upon elephant massages as a unique and harmless activity.

So why is it problematic?

According to the World Animal Protection, an animal welfare organisation, elephants used for this type of entertainment have to undergo a cruel training process. Baby elephants are separated from their mothers at a very young age and subjected to brutal ‘training’ processes designed to make them submissive to humans.

This elephant massage video, which has been viewed nearly 10,000 times on Twitter, has also racked up several critical reactions.

“This elephant was obviously trained to pamper to amuse humans. Why wasn’t it freed?” wrote one Twitter user.

“I hate this kind of stuff. Elephants are not our servants. This is gross,” said another.

Nearly all elephants used for tourist entertainment activities like rides and circuses have been trained to make them obedient. Training can involve starving the animals, locking them in small cages or inflicting pain with bullhooks.

Saxon is a prolific writer with passion for the unusual. I believe the bizarre world is always exciting so keeping you up to date with such stories is my pleasure
Previous Outrage Over Kids TV Show That Centres On Man With ‘World’s Longest Penis’ (Video)
Next Two Giant Pythons Found Inside JCB Machine In India