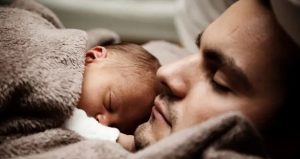 A man has been left in one heck of a dilemma after his partner tried to name their baby son after her ex-partner.

He claims the pair agreed on a few names, but when it came to signing off on the birth certificate for their young son he noticed she’d given him a different name, and one of a former flame.

The man explained his predicament on Reddit, where he mentioned that when he got together with his now-partner she had just come out of an eight-year relationship and didn’t seem to be completely over the break up.

However, as the years went on, she appeared to be moving forward and even introduced him to the former boyfriend after he moved to the same city.

After four years of relative happiness, the pair welcomed their first child into then world. They’d argued the toss about what the baby should be called before the birth, but came to what he believed was a joint decision.

Then, after the baby was born, and mother and child were home safely, he went to perform the formality of signing the birth certificate and found the ex-partner’s name was on there instead.

Obviously, he wasn’t too pleased to see that. She’d even added the middle name as well.

When he tried to take the issue up with her, she said it was a ‘spur of the moment thing’ and says she’s too exhausted to even have a chat about it.

But he has misgivings about the whole thing, and decided to air his grievances with the internet hive mind.

He wrote: “She’s been fobbing me off for a few days now so in the end I told her, calmly, that I’m not signing the birth certificate until we change the name back to what we agreed.

“This caused a bit of a row with her and she’s now refusing to talk to me until I sign the certificate and agree to the name.”

The man said that he is now suspicious and wants a paternity test to ensure he’s the father. He added: “I’m now plagued with doubt and wondering if I should get a paternity test or whether she’s still in love with him.”

Many of those who’ve heard the tale agree with him.

One person commented: “For sure, insist on a paternity test before signing the birth certificate.”

A second wrote: “This is such a red flag.”

A third said: “She is being very shady, naming the baby after her ex is not OK. Get a DNA test and don’t sign the birth certificate until paternity is established and she changes the name to the name you both agreed upon.”

Hopefully he’ll come back and update on what his eventual decision is.

Saxon is a prolific writer with passion for the unusual. I believe the bizarre world is always exciting so keeping you up to date with such stories is my pleasure
Previous Monkey Tail Beard Is Now The New Facial Trend Of 2021 (Photos)
Next Injured Man Spends Over $400 Treating Limping Dog, Finds Out It Was Only Imitating Him (Video)