Home / Uncategorized / Injured Man Spends Over $400 Treating Limping Dog, Finds Out It Was Only Imitating Him (Video)

Injured Man Spends Over $400 Treating Limping Dog, Finds Out It Was Only Imitating Him (Video) 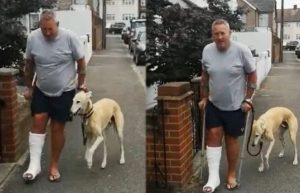 Dog owners should read this story so they don’t waste money on their dogs without knowing it.

A UK man who had spent around £300 on vet bills after his pet dog started limping, learned that there was nothing wrong with the animal, and that he was allegedly only limping out of sympathy for him.

Russell Jones was left unable to walk without limping after breaking his ankle in an accident last year. One day, while out on a walk with his dog Billy, Russel noticed that the canine was limping as well. On another occasion, as he was limping around the house, his partner Michelle noticed that Billy was sort of copying him, so they called a vet to have the dog checked out. Only after paying around £300 ($410)  for X-rays and checkups, did he learn that Billy was only imitating his gait out of sympathy.

“Basically the next day [after breaking his ankle] as I was limping around the house, Michelle noticed that he was sort of copying me. That rose the concern that there might be something wrong with him, so we phoned the vet,” Jones told ITV’s This Morning. “Because of social distancing, he walked in [to the vets] normally, and when he came out they said they couldn’t find anything wrong with him. Then again he started limping, so Michelle filmed it.”

The London-based couple became even more suspicious after seeing the eight-year-old Lurcher sprinting around the garden when Russell wasn’t around. A video of  Russel and Billy both limping during a walk has gone viral on social media, with most viewers expressing their amazement at the canine’s acting skills.

“He’s copying you. That’s brilliant! Though you have my sympathy for the vets bill,” one person commented.

“He’s come out in sympathy with you! Speedy recovery to both of you,” someone else wrote.

Although some have expressed doubt that Billy was just imitating his human master, and claimed that there might have been something wrong with his foot that the X-ray didn’t catch, a 2011 study found evidence of ‘automatic imitation’ in dogs. Scientists found that dogs will imitate their owners even when it is not in their best interest to do so.

Saxon is a prolific writer with passion for the unusual. I believe the bizarre world is always exciting so keeping you up to date with such stories is my pleasure
Previous Man Shocked After Girlfriend Tries To Name Son After Her Ex-Partner
Next Police Storm Zoom Birthday Party After Passers-By Mistake Cardboard Cut-Outs For Real People