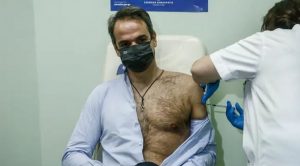 The Greek Prime Minister has become something of a sex symbol after he bared his chest to receive the second dose of his coronavirus vaccine.

Kyriakos Mitsotakis took his second jab at the Attikon hospital in Athens on Monday (18 January). Political leaders have been among the first to receive the vaccine.

However, he became famous for more than his political actions when he unbuttoned his shirt and revealed his chest.

A photograph taken at the time has quickly gone viral, and a lot of people have found a new and unlikely celebrity crush in the process.

Others have asked whether UK Prime Minister Boris Johnson will follow the 52-year-old Greek PM’s lead, and some have compared the photograph to Russian President Vladimir Putin’s famous photograph in which he posed half-clothed on the back of a horse. 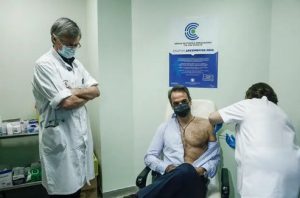 One person commented: “Could he not get his cuff button undone?”

Another said: “I am a straight guy, but even I can see that he’s a fine-looking gentleman.”

Some observers pointed out that perhaps the PM’s rugged charm could make him the face of a campaign to get people to take up the offer of a virus.

It’s a long shot, but it might just work.

One such person tweeted: “Greek Prime Minister Kyriakos Mitsotakis doing whatever it takes to sell his people on the #COVID19 vaccine.”

Mitsotakis became the Prime Minister back in 2019, but this might just be the first time that he has managed to reach a truly worldwide audience.

Unfortunately, it isn’t for his policies, but he’ll no doubt have a spring in his step when he sees some of the comments.

He’s only managed to get a jab because the decision has been made to offer it to ‘state and political leadership’ in the first round of vaccinations.

That hasn’t been a popular decision among opposition leaders, who believe they should wait a bit longer.

Greece started out by vaccinating frontline healthcare workers and the clinically vulnerable, before moving onto the ‘general population’ – starting with the elderly – earlier on this month.

At the moment, the focus is on those aged between 80 and 84 years old.

According to official figures, Greece has carried out more than 93,000 vaccinations, with more than 92,000 having received at least one dose.

Mr Mitsotakis has been has been among the leaders of Europe calling for the introduction of vaccine passports that allow people greater freedom to travel.

Greece is heavily reliant on tourism, and the Greek PM hopes that such as system would give more people the incentive to take up the offer of a vaccine.