Home / Uncategorized / Watch As Man Gets Stuck With Snakes In His Personal Zoo, See What Happens Next

Watch As Man Gets Stuck With Snakes In His Personal Zoo, See What Happens Next 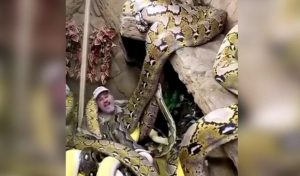 Though this is not a recent video, it will always be very scary to anyone watching for the first time.

An old video from the Reptile Zoo in California has resurfaced on Twitter, and chances are high that it will make you shudder. The video shows zoo founder Jay Brewer sitting in the midst of several large snakes. Even though the sight is enough to send a chill down the spines of most people, he seems positively upbeat in the presence of the reptiles – even describing the scene as his dream come true.

The video shows snakes of all shapes, sizes and colours slithering across Mr Brewer as he tells viewers that he is stuck underneath their collective weight. But if you thought the sight of dozens of snakes pinning a man down couldn’t get scarier, you would be wrong.

The scene gets even scarier when a bunch of snakes, tangled together, fall down on Mr Brewer’s head.

“Since I was a little kid this has been one of my dreams… having a reptile zoo,” Mr Brewer was heard saying in the video, urging viewers to follow their dreams too. Then, as he thanked social media users for their support, several snakes fell down on his head, prompting him to exclaim “Whoa!”

Though Mr Brewer laughed and continued his speech, unbothered the hair-raising interruption – not many on Twitter could share his nonchalance.

“CAN YOU SPEND 1 HOUR INSIDE HERE FOR 50 MILLION DOLLARS??” asked one Twitter user while posting the video on the microblogging platform.

CAN YOU SPEND 1 HOUR INSIDE HERE FOR 50 MILLION DOLLARS??? pic.twitter.com/WP8Rt4rT6W

The video has received thousands of views on Twitter, where many responded to it to say that they would not spend an hour with the snakes, even if they were paid handsomely for it.

“If each of the was fed a gazelle before I had to start to make sure they weren’t hungry I might…….still say hell no!” wrote one Twitter user.

“Oh no! I can’t even watch this video nor touch the screen where those snakes were,” another agreed, while a third wrote: “That’s a big no from me.”

On the other hand, some people also said they would do it for the money, provided the snakes were non-venomous and not constrictors.

The video was shared by the Reptile Zoo on Instagram back in 2019.

Saxon is a prolific writer with passion for the unusual. I believe the bizarre world is always exciting so keeping you up to date with such stories is my pleasure
Previous Viral Video of Parked Motorcycle Moving On Its Own Stuns Internet
Next Gun Man Robs Reporter Live On Air, Watch Viral Video