Fisherman Catches Shark But Then Loses It To Crocodile (Video) 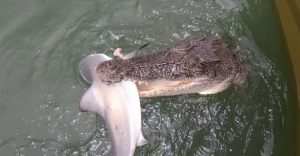 Two fishermen were left to rue missing out on one of the greatest catches of their lives, after a shark they’d managed to hook was nabbed off the end of their line by a crocodile. Watch the incredible footage below:

Australians Geoff Trutwin and Nat Barnes were off the coast of Wyndham, Western Australia enjoying a fishing trip when they managed to hook a juvenile blacktip shark.

The pair couldn’t believe it, but their joy soon turned to panic when a deadly rival decided it fancied their catch as a tasty meal.

A two-and-a-half-metre-long saltwater crocodile latched on to the stricken shark, and so began a furious tug of war that eventually came to an end when Barnes realised that going up against a ravenous reptile probably wasn’t the brightest of ideas.

After cutting the line, the pair watched the crocodile swim off with the shark, only to devour it on the riverbank.

Trutwin explained: “We had been out fishing for a few hours and Nat caught a juvenile blacktip shark and while he was reeling it in, this saltwater croc decided he wanted that meal.

“He shot over really quickly and grabbed it. The crocs aren’t timid around people, they’re very happy to be around us. You’ve got to be careful as they’ll eat you.” 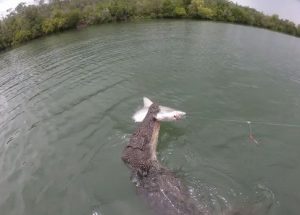 “I’ve been photographing wildlife for 30 years and I’ve seen the crocs around here a lot in my life but I’ve never had an interaction like this,” he said.

“It was shocking. It was just incredible to see something so powerful up close and powerful.”

Fortunately for the pair, they weren’t dealing with a full-size croc, or the result could have been very different.

“This one was only young but it was still about 2.5 metres in length,” said Trutwin.

“I got as close to the side of the boat as I was willing to get as I didn’t fancy losing my fingers.

“They can look pretty placid when they’re lying on the mud flaps but once this one decided he was hungry, there was no way he was letting it go. They are very powerful.”

Detailing the moment that he admitted defeat, he added: “Once we cut the shark free, the crocodile took it straight back to the banks and wolfed it down.”

Although defeated, Trutwin was full of respect for his opponent, saying: “They’re also lightning fast. Not only are they quick and powerful animals, they’re also really smart.

“If you’re a regular visitor to the same spot, they’ll watch you closely and get closer and closer to you. One day they’ll be just under the water next to you and you’ll have no idea until they’re biting your leg.”

Tags Fisherman Catches Shark But Then Loses It To Crocodile (Video)

Saxon is a prolific writer with passion for the unusual. I believe the bizarre world is always exciting so keeping you up to date with such stories is my pleasure
Previous Man Consumes Only Beer For Lent To Raise Money For Hospitality Industry
Next Breastfeeding Facebook group for mums shut down after men secretly join to look at photos