Watch As Woman Finds An Entire Apartment Behind Her Bathroom Mirror 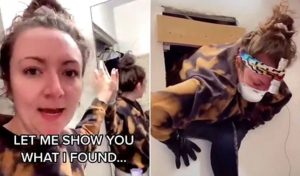 A New York City woman made a stunning discovery inside her house – she found an entire apartment tucked away behind her bathroom mirror. Samantha Hartsoe documented her discovery in a series of TikTok videos that have now gone massively viral on social media, reports CNN.

Ms Hartsoe, who works for a nonprofit in the city, said in the first of her TikTok videos that she decided to investigate how there was a cool breeze blowing inside her bathroom, despite there being no window or cooling vent.

In the clip, which has been viewed more than 7 million times on TikTok, she showed how the breeze was strong enough to move her hair. On searching her bathroom, she found that it was coming from a mirror mounted above her sink.

Ms Hartsoe could not have predicted what she found when she moved the mirror. Behind the mirror, she discovered a large hole that opened up into a dark room.

“I need more answers,” she says in a video. “‘I have to go in and figure out what is on the other side of my bathroom.”

Then, wearing a face mask and gloves, and carrying a hammer for protection, Ms Hartsoe is seen entering the room. Once she climbs inside, she realises that she did not just stumble upon a secret room but a whole apartment. “Wow, this is a whole other apartment,” she says.

Footage she shared on TikTok shows the apartment littered with garbage bags and used water bottles – things that she remarks are “signs of life”.

“I was kind of expecting there to be somebody, especially with the water bottle being there,” Ms Hartsoe said in an interview to Curbed. “And that definitely put me on edge.”

Describing the space further, she said that it was “really old”, and the bathroom area had no fittings or actual toilet but only piping.

Unsurprisingly, the discovery has created a huge buzz online. On Twitter, Ms Hartsoe’s videos were reposted and have gone viral with over 4 million views.

“What?! I have so many questions because I’d assume in NYC they’d be itching to rent that space out,” one Twitter user remarked.

“This was insane,” another said, while a third branded the videos “better than the best true crime podcast you’ve ever streamed.”

Saxon is a prolific writer with passion for the unusual. I believe the bizarre world is always exciting so keeping you up to date with such stories is my pleasure
Previous Gun Man Robs Reporter Live On Air, Watch Viral Video
Next Watch As Gujarat Forest Staff Risk Their Lives to Save Lion Cub In Net