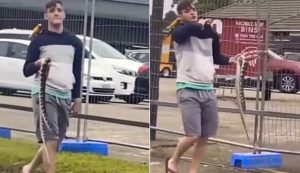 You could describe this as a strange way to talk a walk but this man seems to be having fun.

A video of a man walking casually down a street with a python in his hand and a parrot perched on his shoulder has left social media users amused and puzzled in equal measure. According to Unilad, TikTok user Hayley Roben was waiting at a traffic signal with some friends when she noticed the man sauntering down the road with his pets.

A video filmed and posted on TikTok by Ms Roben shows the man walking casually with a yellow parrot on his shoulder and a snake held nonchalantly in his hand. As she filmed the scene unfolding in front of her, Ms Roben’s co-passengers were heard laughing in the video.

“Are you kidding me. Look at him, he’s having the best time,” one person was heard saying.

A few seconds into the video, the man transferred his python from one hand to the other before plopping it down on the ground at a pedestrian crossing to press a button. He then picked up the snake again and was seen playing on his phone as he waited to cross the road.

Saxon is a prolific writer with passion for the unusual. I believe the bizarre world is always exciting so keeping you up to date with such stories is my pleasure
Previous See Snake With Smiley Face Emojis On Its Back That Was Sold $6,000 (Video)
Next Watch As Doctor Makes Zoom Court Appearance While Performing Surgery