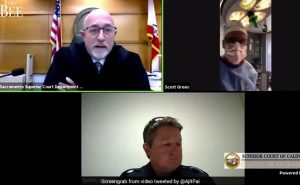 A doctor in the US is facing an investigation after appearing for a virtual court hearing while operating on a patient. Dr Scott Green, a plastic surgeon from California, appeared for a traffic court hearing on Zoom while still inside his operating theatre on Thursday, reports the BBC. The hearing was held virtually because of the coronavirus pandemic.

In a video which is now viral online, Dr Green was seen still dressed in surgical scrubs while appearing for the court hearing. “Are you available for trial?” the clerk asked. “It kind of looks like you’re in an operating room right now?”

When questioned by the presiding commissioner about the propriety of the move, the doctor said he had “another surgeon right here who’s doing the surgery with me”.

Judge: “Unless I’m mistaken, I’m seeing a defendant who’s in the middle of an operating room appearing to be actively engaged in providing services to a patient. Is that correct, Mr. Green?”

Footage of the bizarre court hearing has been watched tens of thousands of times on social media. Several commenters said that the doctor’s actions were irresponsible and that he deserved to be sued by the patient he was operating on.

“That patient has grounds for a malpractice suit and that doctor should lose his license,” wrote one Twitter user.

“Is it possible the defendant did this as a stunt to garner sympathy?? What was he charged with. Regardless, this is just insane,” another said.

According to The Guardian, the hearing was promptly adjourned by presiding commissioner, Gary Link, when he realised what was going on.

“I don’t think that’s appropriate,” Mr Link said. “I’m going to come up with a different date when you’re not actively involved or participating and attending to the needs of a patient.”

The Medical Board of California has said it will investigate the incident.

Saxon is a prolific writer with passion for the unusual. I believe the bizarre world is always exciting so keeping you up to date with such stories is my pleasure
Previous Man Walks Casually With Python In Hand, Parrot On Shoulder (Watch Viral Video)
Next Fisherman Captures Incredible Footage Of Shark Consuming Whale Carcass