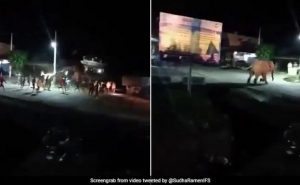 A video of a huge crowd of people chasing an elephant has sparked outrage on social media. Indian Forest Service officer Sudha Ramen shared the disturbing footage on Twitter to raise awareness on the issue of human-animal conflict.

According to the Wildlife Trust of India, human elephant conflict has increased due to encroachment on forest land and loss of habitat. In India, a large chunk of the country’s elephant habitat is unprotected or already in use by humans, which means that these gentle giants often stray into human settlements while making their daily or seasonal migration through their home ranges. Elephant corridors allow elephants to move between secure habitats freely, without being disturbed by humans.

“Unlike humans, animals don’t limit or know their boundaries. When it comes to elephants, the memories of passage are carried across generations,” wrote IFS officer Sudha Ramen. “People living near forest areas or near the corridors should not panic, as this could trigger d animal. They too have the right to passage.”

No words!! Wondering who is the animal here 😔 pic.twitter.com/LAcY276HdX

Her video has sparked outrage on social media, with many criticising the crowd for chasing the animal and others branding the behaviour “inhuman”.

“What can we call this? Shameful behaviour from the crowd,” wrote one Twitter user.

“So sad, how can we educate our public about this and also safeguard the poor animal?” another asked.

In her Twitter thread, Ms Ramen said that forest departments across the country have been working to educate people and address the issue of man-animal conflict.

2 Comments “Let me tell you, each case is different and there is no ‘one-solution’. Anthropogenic pressure is mounting up over d forests & wildlife, so the animals are equally the same stress. Awareness is the key,” she wrote.

Saxon is a prolific writer with passion for the unusual. I believe the bizarre world is always exciting so keeping you up to date with such stories is my pleasure
Previous Alaska Woman Attacked By Bear While Using Outhouse
Next Mortgage Experts Say Buying A House On The Moon Could Cost $325,067 A Month