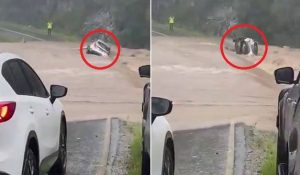 Australian Prime Minister Scott Morrison has shared a hair-raising video on his Twitter account. Initially shared by Transport and Main Roads Queensland, the clip shows a car on the streets being washed away due to the force of floodwater. Reiterating the slogan, ‘If it’s flooded, forget it,’ the Australia PM said that thankfully, the driver was able to come out of the vehicle before it was washed away.

This is why you should never go into flood waters. If it’s flooded, forget it.

This is why you should never go into flood waters. If it's flooded, forget it.

Thankfully, this driver was able to get out safely before the car was swept away. https://t.co/slQpUvQMFr

The footage has been watched over 94,000 times on the microblogging platform. Several users are reacting to the tweet.

Official account of the NOAA Weather-Ready Nation Ambassador quote-tweeted the video and advised people to ‘Turn around. Don’t Drown.”

The Twitter account of Transport and Main Roads Queensland added, “When we say #IfItsFloodedForgetIt we mean it.” The department said that the possibility of landslides and flash flooding remains high during the floods.

Saxon is a prolific writer with passion for the unusual. I believe the bizarre world is always exciting so keeping you up to date with such stories is my pleasure
Previous Watch Shocking Video As Swarms Of Spiders And Snakes Emerge In Flood-Hit Australia
Next Married Woman Pays Professional Cuddler $80 Per Hour To Always Cuddle Her