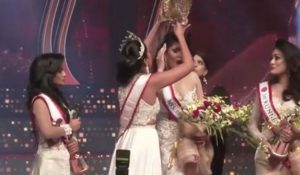 This is not a good memory for a queen and the last of the ugly incident may not have been seen yet.

The winner of Sri Lanka’s popular beauty pageant, “Mrs Sri Lanka”, sustained head injuries after a fight broke out on stage during the crowning ceremony. It all started when beauty queen Pushpika De Silva bagged the “Mrs Sri Lanka” title on Sunday. Moments after Mrs De Silva concluded her victory walk, the reigning Mrs World and 2019 Mrs Sri Lanka, Caroline Jurie, did something unexpected. She snatched the crown from Mrs De Silva’s head and awarded it to the first runner-up.

Caroline Jurie gave explanations for what she did. In a video uploaded by the Colombo Gazette, Mrs Jurie explained on stage that as per pageant rules a divorced woman cannot hold the title. “There is a rule that you have to be married and not divorced. So, I am taking the first step in saying that the crown goes to the first runner-up,” she said.

The video shows Mrs Jurie tugging and pulling at the crown that was entangled in Mrs De Silva’s hair as other contestants look on. A visibly shaken Mrs De Silva walked away from the stage as the first runner-up went on to give her victory speech.  The entire incident was telecast on national TV.

On Monday, Mrs De Silva wrote in a Facebook post that she had sustained injuries to her skull from the incident. “As I write this, I responsibly say that I am not a divorced woman. If I am divorced, I challenge them to submit my divorce papers,” she wrote in a statement translated from Sinhala.

“So, even though that symbolic crown has been snatched from my head, I would like to inform you that I have already taken the necessary legal action to correct the injustice and insult,” she added.

Following this, the pageant officials confirmed that Mrs De Silva was not a divorcee and that the crown would be returned to her. In this regard, the national director of Mrs Sri Lanka World, Chandimal Jayasinghe, told the BBC that they were disappointed by the turn of events. “It was a disgrace how Caroline Jurie behaved on the stage,” adding that the Mrs World organisation has already begun an investigation on the matter.

As per the report, the police have questioned Mrs Jurie as well as Mr Jayasinghe about the incident.

After being re-crowned on Tuesday, Mrs De Silva told the press that she was dedicating the award to all the single mothers in Sri Lanka.

Saxon is a prolific writer with passion for the unusual. I believe the bizarre world is always exciting so keeping you up to date with such stories is my pleasure
Previous Horrifying Video As Giant Lizard Creates Chaos At Supermarket
Next Man Orders Apples From Online Store, Gets Apple iPhone Instead