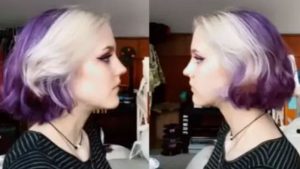 She still wonders whether her parents did “copy and paste” while giving birth to her but this finding is a bit weird.

She posted her bizarre finding in a video, saying: “Am I trippin’ or did my parents’ DNA really just say copy and paste.”

In the video, she shows a photo of her parents where they are looking at each other, then posts her own side profile from both sides of her face.

Weirdly, it does really look like her face is slightly different from each side. On the first photo, her nose and chin look slightly different, and really similar to her mum’s. The other one looks the spit of her dad.

One viewer wrote: “OMG literally the other day I realised my side profiles look really different and I’ve always been told I look like both of my parents. Is this it?”

Another said: “I swear everyone is! That’s why some people have uneven faces.”

A third replied: “I’ve got two faces like that, I’ve got to compare them to my parents now.”

Researchers at King’s College London found that some features are likely to be entirely genetic, especially the shape at the end of the nose, the area above the lips, the cheekbones, the inner corners of the eyes and the area below the lips.

As reported by Stylist, Professor Giovanni Montana from King’s College London said: “The notion that our genes control our face is self-evident. Many of us have facial traits that clearly resample those of our parents, and identical twins are often indistinguishable.

“However, quantifying precisely which parts of the face are strongly heritable has been challenging so far.”

Dimples are a recessive, which means that if at least one parent has them, the child is likely to have them too.

Saxon is a prolific writer with passion for the unusual. I believe the bizarre world is always exciting so keeping you up to date with such stories is my pleasure
Previous Drunk Men Land in Hospital After Injecting Cream Into Their Penises To Make Them Bigger
Next Cat Caught Smuggling Drugs Into Panama Prison