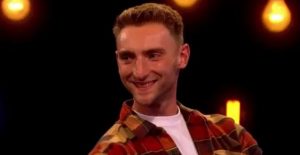 One of the contestants on Channel 4’s Naked Attraction has claimed that a woman farted into his mouth whilst he was performing a sex act on her.

Carlo was appearing on the programme hoping to find love after recovering from leukaemia.

Naked Attraction is a show whereby singletons of all shapes and sizes search for a date – but there’s a difference.

In order to choose who they want to take out, they are presented with a selection of potential candidates who are behind multi-coloured screens.

Then, from the bottom up, those screens reveal their potential partners, meaning that they’ve seen all of their junk before they’ve actually heard them talk.

It’s a strange concept, but a very popular one.

Anyway, the contestants often also like to share some of their best stories of sexual misadventure, and 28-year-old steeplejack Carlo was no different.

He told host and sex expert Anna Richardson about a time when he was performing oral sex on a partner and she let rip right into his mouth.

Not even by accident, apparently.

He explained: “When I was a young teenager, I was down there, going to work, and the next thing I know this girl let out a fart in my mouth.”

Anna asked: “I take it she wasn’t thrilled with what you were doing?”

Carlo responded: “I don’t know what she was thinking, I think she thought it was funny. I was just in complete shock, with fart in my mouth.”

Anna went on to explain then that this is apparently a thing, and it’s called eproctophilia.

In the end, Carlo selected a woman called Lizzi to head off on a date with, but – unfortunately – it didn’t result in anything more.

Despite the pair having a good time, the pair decided that was enough, citing a lack of chemistry.

Naked Attraction airs each Thursday on Channel 4 at 10.00pm.

Vanko is a cheerful writer whose enthusiasm for unusual stories is inspiring.
Previous Influencer Slammed For Eating Her Own Placenta In Shocking Video
Next Couple changes houses 18 times in 3 years because wife is scared by cockroaches