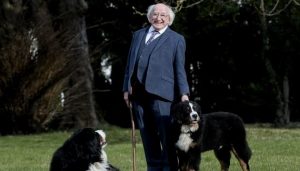 Probably this dog did not know he was with the President and was playing on live TV, distracting attention from the number one citizen of Ireland.

A video of the President of Ireland’s dog interrupting his address to a news channel to demand attention is winning hearts on social media. President Michael D Higgins was delivering a tribute to actor Tom Hickey, who died on Saturday, when one of his two Bernese mountain dogs walked up and sat by his side, begging to be played with.

Misneach, the seven-month-old puppy, stole the limelight as the president spoke to Irish broadcaster RTE. He playfully bit the president’s hand, pawed at his legs and kept up a constant demand for attention. President Higgins kept his focus on the address, but he did offer up his hand to the dog to play with.

A video of the moment was put on the president’s official TikTok page, where it has gone viral. On Twitter, where the video soon made its way, it has been watched by more than 1.6 million people.

Irish President Michael D Higgins adopted Misneach earlier this year. The puppy has a companion in Brod, the president’s other pet dog. The two dogs have quite a number of fans on social media, where their pics and videos surface periodically.

Vanko is a cheerful writer whose enthusiasm for unusual stories is inspiring.
Previous See Two Bikers Practicing “Social Distancing” in a Strange Way
Next Watch Hair-Raising Video Of A “Snake Ball” Breaking Down the Internet