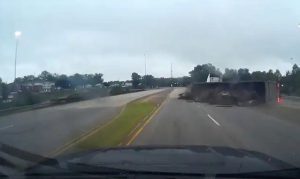 A man’s miraculous escape from an incident that may have ended his life, has gone viral ater the unbelievable moment was captured on camera.

The terrifying video of the man’s car almost crashing into a loaded truck, which toppled over while negotiating a high-speed turn, has gotten massive views online.

As the attentive car driver saw the truck’s load shift to one side as it moved off the ramp taking an angular route to the highway, he started slowing down his vehicle just in time to avoid what would have been a near-certain collision with the truck. The incident occurred in the US state of Alabama on May 10 and it was recorded by the dashcam in the car, which showed the car driver’s point of view.

The video shows the car moving along its lane on a highway and a truck loaded with scrap metal coming off the ramp towards the main highway some distance away from it. Both the vehicles, it appeared, were moving to be at the same point at the same time on the highway, when the lorry tied to the truck’s rear toppled due to the momentum built by the shifting weight of the load on it..

Probably fearing the worst, the car driver had already started slowing down his car and managed to stop it just behind the toppled truck and the fallen scrap metals. The car driver then drove his vehicle backwards to move it a few metres away from the truck, the video showed. He said had he delayed slowing down his vehicle even by one second “it (the truck) would have been on the top of me”.

Saxon is a prolific writer with passion for the unusual. I believe the bizarre world is always exciting so keeping you up to date with such stories is my pleasure
Previous Man Robs Bakery, Owners Give Away Cookies With Suspect’s Face Printed On Them
Next Shocking video as Police in India Thrash Woman In Front Of Daughter Over Mask