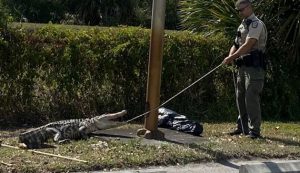 The cops are still trying to ‘figure out’ whether the alligator wanted to buy cheeseburger or chilled soda.

“Deputies responded to Lee Boulevard today after this six-ft gator chased pedestrians through a Wendy’s parking lot,” the Lee County Sheriff’s Office tweeted. “He may have just been ‘hangry’ for a cheeseburger, but he gave many quite the scare!” the department joked.

The sheriff’s office worked with Florida Fish and Wildlife Conservation Commission personnel to rescue and relocate the gator.

Photos of the rescue operation were shared on Twitter. The Lehigh Acres Fire Department also shared footage of the gator from across the street. It shows the reptile wandering through the parking lot of a rehabilitation centre.

He may have just been "hangry" for a cheeseburger, but he gave many quite the scare!

Alongside FWC, we wrangled the gator and safely relocated it. pic.twitter.com/OIiDHCmMJC

That the incident took place in Florida – a state that sees more human-gator interaction than perhaps any other in the US – did not come as a surprise to Twitter users. Florida is home to around 1.25 million alligators and they are frequently spotted at golf courses, swamps and other open spaces.

Saxon is a prolific writer with passion for the unusual. I believe the bizarre world is always exciting so keeping you up to date with such stories is my pleasure
Previous Shocking video as Police in India Thrash Woman In Front Of Daughter Over Mask
Next Couple Chain Themselves Together For Months To Prove Their ‘Undying’ Love (Video)