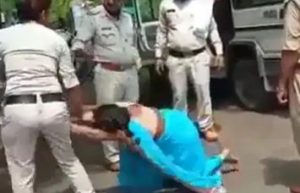 This might be hard for a lot of people to watch but it happened in India as part of effort to enforce Covid-19 guide lines.

A woman was kicked, punched and dragged on a road by a group of police personnel in Madhya Pradesh’s Sagar district for not wearing a mask amid the COVID-19 pandemic.

The woman and her daughter were going out to buy groceries amid the Covid restrictions when the incident that was shot on mobile video happened.

In visuals shared on social media, the woman is seen being thrashed by two policemen while she tries to free herself. She falls on the road several times and is seen struggling to get up.

A woman police officer is also seen trying to take her away in an official vehicle, but she refuses to get inside, while her daughter tries to pull her back. Unable to take the woman away, the police officer drags her by her hair while she screams on the road.

Saxon is a prolific writer with passion for the unusual. I believe the bizarre world is always exciting so keeping you up to date with such stories is my pleasure
Previous Jaw-Dropping Video of Driver’s Narrow Escape As Truck Topples In Front Of Him
Next Alligator Chases Customers Through Restaurant Parking Lot (Video)