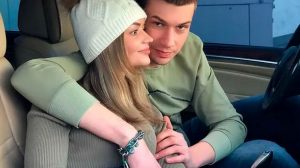 They do everything together but the lady lost her job because customers of the beauty care company where she worked felt uncomfortable with her boyfriend’s regular presence. They didn’t want him close to them while she attended to their skin.

This is a story of a couple stuck to each other for months, something many cannot even do for more than a few hours. Many people could end up attempting to gnaw ourselves free within minute – but this couple have vowed to remain chained together, report’s Ladbible.

Despite claiming to be ‘fed up’ – yes, that’s it, just ‘fed up’ – Viktoria Pustovitova, 28, and Alexander Kudlay, 33, say they only plan to cut the welded chain at their wedding.

With no wedding date actually set, who knows what could happen?

The pair, who are from Kharkiv in Ukraine, made themselves inseparable on Valentine’s Day and want the stunt to bring them millionaire status while raising money for charity.

Their chain is welded and they’d need emergency services to cut it open.

The couple wear specially developed clothing, with zips from top to bottom enabling them to dress and undress without Houdini-like contortions. 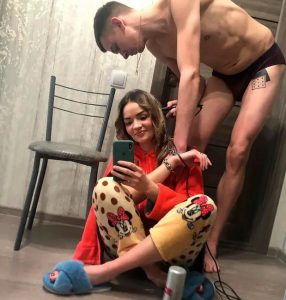 Viktoria and Alexander have already set both Ukrainian and world records for their stunt and now they’re seeking to flog their chain for $3 million (£2.1m) at an international auction.

Alexander said: “We want to donate $2m to charity and are currently negotiating. We will leave $1m for our personal use.

“We will buy apartments for ourselves and for our relatives. We do not have our own housing.”

They broke the record on 14 May, he said, calling it a ‘big victory’. However, he insisted they were ‘going further’ and taking part in a reality TV show.

Thankfully, Alexander managed to carry on working as a car salesman with his girlfriend by his side. But unfortunately, Viktoria had to give up work as an artificial eyelash creator because clients didn’t want her boyfriend being so close to them.

Another problem has been public toilets, with Viktoria having to take Alexander into the ladies’ – which hasn’t always gone down too well.

Viktoria explained how things haven’t been easy for her: “We are a bit fed up with each other. It is complicated for me. I was nervous, am nervous and, probably, will continue to be nervous.

“Yes, I had flashes where I wanted to remove the chain, and jerked it. But then time passed, I calmed down.”

Her boyfriend added: “We are getting a little tired of all this. We get weary of each other. 24/7 together – one of us wants to be here, the other there.”

Cut the damn thing off then, guys.

Vanko is a cheerful writer whose enthusiasm for unusual stories is inspiring.
Previous Alligator Chases Customers Through Restaurant Parking Lot (Video)
Next Man almost starves to death after ‘dry’ fasting for over a month to receive Lamborghini from God for his girlfriend