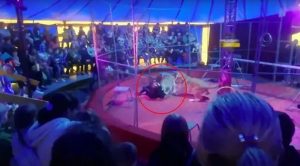 Instead of lighter-mood entertainment and fun, parents and their kids witnessed what could be described as one of the most traumatic horror movies of their lives in an unusual place – a circus.

A circus lion tamer suffered arm and leg wounds today in a terrifying attack by a lioness in the ring, reports Ladbible.

Scared children and their parents rushed from the circus tent in Russia as the beast twice clawed and sank her teeth into trainer Maxim Orlov.

Orlov and other circus staff fended off the beast – called Vega – with poles but the angry lioness caused injuries which required hospital treatment in Moshkovo, Novosibirsk region.

Before he was attacked two lionesses – Vega and Santa – were seen brawling in the ring. Then Vega made two attacks on Orlov.

According to reports a pregnant woman suffered an epileptic seizure from shock and witness Viktoria said: “The lionesses went berserk.

“When we ran away, there was a wild roar from the animals. The tamer was attacked.

“A pregnant woman had an epileptic seizure from fright. An ambulance was called.”

After the attack – the latest of many in Russia – there were calls for a ban on live animals in circuses.

The trainer – after being bandaged in hospital – insisted: “Cases such as today are very rare, but animals are animals.

“Vega is five years old and has been wayward since childhood.”

She will not perform again after the attack. He added: “We will negotiate with the zoos to exchange her for a little lion cub.”

He blamed the attack on the Ural Travelling Circus not working during the pandemic.

Taking to social media, one person said: “How many similar cases before people stop seeing the suffering of wild animals as entertainment for children?”

Another added: “This is torture of wild animals.” 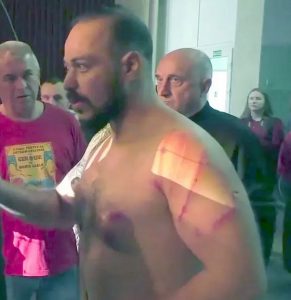 As previously mentioned, this isn’t the first time a circus trainer has been attacked in front of a live audience.

Back in 2019, well-known performer Hamada Kouta was overpowered by a lion as a crowd screamed.

Kouta was floored by the big cat which suddenly turned aggressive in the ring. His arm, leg and back were mauled and clawed.

After the attack, Kouta said: “I called up one lion, and the second one attacked me from the front. I stopped him in the middle of the ring calmed him down but he refused to return to his sitting position.

“I stepped backwards, there was a stand behind me, I hit it and fell. The lion jumped at me and bit me – but thank God not on my neck.

“He immediately let me go. My back, arm and leg were hurt. Scars from two claws and one tooth are on my leg, tooth marks on my arm, one four centimetres (one and a half inches) deep from three claws on my back.”

Saxon is a prolific writer with passion for the unusual. I believe the bizarre world is always exciting so keeping you up to date with such stories is my pleasure
Previous Man almost starves to death after ‘dry’ fasting for over a month to receive Lamborghini from God for his girlfriend
Next Students Help Teammate Recovering From Cancer Complete Race (Video)