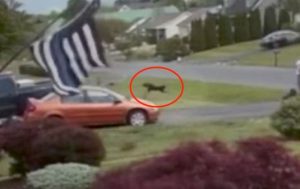 A dog took what could be described as a terrifying ‘ride’ that would have ended tragically but for a stroke of luck.

Duke the 70-pound Labrador took an impromptu flight this week when a dust devil whipped him up into the air in Weyers Cave, Virginia.

The pooch was lifted up, spun around, and then dumped back down on the ground. Luckily, he was unhurt.

“It’s still very tough to imagine that you know a 70-pound dog or close to it and how you know, you don’t see that every day,” Duke’s owner, Brittany Wampler, told WHSV. “How would that have happened? He just kind of looked around and was shaken for a minute but you know he went right back to playing with the kids after that.”

Wampler was at work when the dust devil struck.

She sought out surveillance footage after her three children insisted the freak occurrence had really happened. Incredibly, it was captured on a neighbor’s doorbell camera.

“I just couldn’t quit watching,” Wampler said of the video.

“(To say I was) shocked would probably be an understatement,” she told The Dodo. “He’s been coined Duke the Flying Dog at our house. The kids joke about buying him a cape. But I’m OK if he never takes flight again.”

The National Weather Service confirmed it was most likely a dust devil that had lifted Duke into the air.

Saxon is a prolific writer with passion for the unusual. I believe the bizarre world is always exciting so keeping you up to date with such stories is my pleasure
Previous Students Help Teammate Recovering From Cancer Complete Race (Video)
Next Watch As Girl With Prosthetic Leg Thrills The Internet As She Climbs Over A Ditch