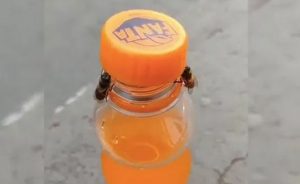 If these bees were human, they’ll surely get endorsements based on the popularity they got from this thrilling video. They have also shown that they are smart too.

A video that has gone viral online shows two bees working together to unscrew the cap off a plastic bottle. The video was filmed in Brazil’s Sao Paulo, according to licensing agency ViralHog, but it has surprised people across the world.

In the 10-second-long clip, the two bees sit on opposite sides of the plastic cap and rotate it to unscrew it from the bottle. Once the cap has been loosened, they simply use their front legs to push it off the bottle.

“The video was recorded during my lunch break from work. I got a soda from a customer but soon the bees stole it,” the person who recorded the video was quoted as saying by ViralHog.

“The bees teamed up to steal my soda,” reads the text in Portuguese at the bottom of the video, followed by: “And they will do it. Look, so smooth.”

The video has racked up over 1.3 million views on Twitter and almost another million on YouTube – where people were left in awe of the big task that the tiny bees managed to accomplish.

“Incredible. Documentation of their intelligence,” wrote one person. “When they can actually unscrew the cap… that’s when we should be scared,” said another.

“Well, that’s it for humanity. We’ve had a decent run but if bees have mastered the screw-top lid I think this is the beginning of the end,” a Twitter user said while sharing the video.

“I am willing to surrender to the new bee overlords,” another quipped, while a third said, “Is this the real life? Is it just Fanta-sy?”

Saxon is a prolific writer with passion for the unusual. I believe the bizarre world is always exciting so keeping you up to date with such stories is my pleasure
Previous Shocking Video of Doctor Couple In India, Stopped, Shot Dead in Car
Next Watch Shocking Moment Unidentified Man Was Dragged Out of Vehicle and Assassinated in Broad Daylight in Nigeria