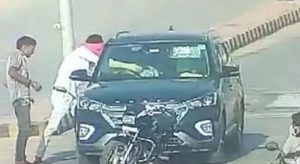 A doctor couple in Rajasthan’s Bharatpur, India, was shot dead in a car yesterday by two people riding a bike at a busy crossing in the city. The incident was captured in a chilling CCTV footage.

The incident took place at 4.45 pm on Friday, reports NDTV.

The two men on a bike first first overtook the couple at the crossing. They then walked over to the couple. As husband lowered the car’s window, one of the men fired multiple shots at them and then the two fled the scene on the bike.

Revenge appears to be the motive behind the crime, according to the police.

The couple was allegedly involved in a two-year-old case of a murder of a young woman, who is suspected to have had a relationship with the husband.

The man who fired at the couple has been identified as the murdered woman’s brother. The doctor’s wife and his mother are both accused in the case.

Saxon is a prolific writer with passion for the unusual. I believe the bizarre world is always exciting so keeping you up to date with such stories is my pleasure
Previous Watch As Girl With Prosthetic Leg Thrills The Internet As She Climbs Over A Ditch
Next Jaw-Dropping Viral Video As Two Bees Work Together To Open A Bottle of Drink