See What Happens Next As Elephant Comes Across Tiger While Walking 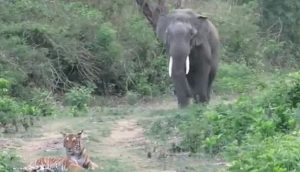 Life in the wild is not easy for weak or disadvantaged animals. Of course, tigers are among the most favoured in the wild but it becomes surprising when elephants also shudder when they spot tigers.

A video shared by actress and wildlife activist Dia Mirza shows a tiger making way for an elephant in a jungle. The video shows the elephant walking down a forest path, in the middle of which sits a tiger.

The tusker advances slowly, catching sight of the big cat but seemingly unconcerned about it. Eventually, the tiger turns its head and spots the elephant. Then, in a move that has surprised many on social media, the big cat gets up and runs into some nearby bushes, allowing the elephant to pass.

“Watch what happens at the end!” wrote Dia Mirza while sharing the video on Twitter this Friday. Take a look at it below:

The video has collected nearly thousands of views and hundreds of comments on the microblogging platform.

“As I always say ‘elephant is the lord of the forest’… Nobody stands a chance against him,” wrote IFS officer Parveen Kaswan.

In the wild, tigers usually prey on large or medium-sized mammals like deer, monkeys and boars. Instances of tigers hunting full-grown elephants are rare, but not unheard of. According to The New Indian Express, in 2009, a tusker was killed by a tiger inside the Eravikulam Wildlife Park.

Saxon is a prolific writer with passion for the unusual. I believe the bizarre world is always exciting so keeping you up to date with such stories is my pleasure
Previous News Presenter Blunders on Live TV As She Announces Death Of Playwright William Shakespeare
Next Onlookers Stunned After Spotting Couple Having Sex In Hotel Window During Religious Festival (Viral Video)