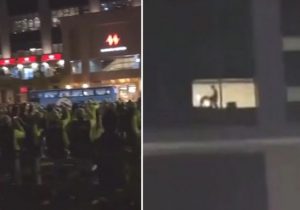 This is a serious warning to couples that might get carried away by desire to have sex anywhere. You might not know who is actually watching.

Case in point – this incredible moment from last December when a couple were seen having sex in a hotel window by large crowds gathering to celebrate a religious festival.

The couple were caught in the act by the watching throng beneath as they got stuck into it on the tenth floor or a hotel in Taipei, Taiwan.

The incident took place on 6 December 2020 as hundreds of devotees gathered to mark the 165th anniversary of the Qingshan Palace.

The large group of people were parading past the hotel when a good number of them spotted the pair getting it on way above their heads.

Needless to say, many among those parading were shocked and horrified at what they saw taking place in the swanky hotel on Meng Jia Avenue.

The explicit scene came after a parade with firecrackers and mythical figures from the nearby temple in Wanhua district. Some locals call it a ‘mini Chinese New Year’.

Mobile phone footage shows how the lovers appeared not to notice that hundreds of citizens were staring at them from below. Some picked up their cell phones to record while others shouted.

According to local media, police received several complaints from the public mentioning the ‘live erotica’ on the upper floor of the hotel. Officers went on to investigate the pair’s identity.

The police said at the time the act was ‘harmful to men and women’ and that ‘the identity of the couple will be investigated and handled in accordance with the law’.

They also criticised people who recorded the scene as it could ‘violate the spreading of obscenity laws’.

Saxon is a prolific writer with passion for the unusual. I believe the bizarre world is always exciting so keeping you up to date with such stories is my pleasure
Previous See What Happens Next As Elephant Comes Across Tiger While Walking
Next Watch Shocking Video As Teen Pushes Bear Off Wall To Save Her Dogs