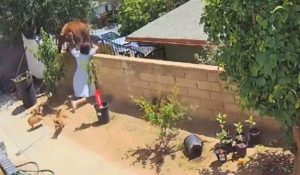 This is one stunt you shouldn’t try at all. This teenage got lucky but that might not be your story.

A shocking video shows the moment a 17-year-old in California pushed a bear off a fence to save her dogs. The surveillance footage, filmed on Memorial Day, shows the bear and its cubs walking along a low brick wall in the teenager’s backyard when the family’s dogs started barking at them. According to KTLA, the Morinico family, to whom the backyard belonged, were gardening at the time.

In the hair-raising video, the huge brown bear was seen swiping at one of the family’s dogs, who ran back after receiving a particularly hard blow. The bear then turned its attention to one of the smaller dogs and had almost picked it up when the teen, named Hailey, rushed out to save it.

“I see the bear, it’s grabbing my dog, Valentina, and I have to run over there. She’s a baby,” Hailey said to KTLA. “And the first thing I think to do is push the bear. And somehow it worked.”

Footage shows the gutsy teen shoving the bear, causing it to fall backwards. She then scrambled to herd her dogs back to safety, pick one up and run back.

The footage was shared on TikTok and Instagram by Hailey’s cousin, Brenda (@bakedlikepie). It has since gone viral with millions of views and made its way to other social media platforms like Twitter. Watch it below:

This is crazy af omg pic.twitter.com/Sh14yVD9Eu

According to Snopes, the video was viewed nearly 10 million times in the first six hours after it was posted on TikTok. It has been widely shared and re-posted on Instagram and Twitter as well, collecting lakhs of views and leaving people amazed.

Hailey suffered a sprained finger and scraped knee as a result of her bear encounter. “By the time that the bear got pushed over, I was out of there with my other dog,” she said.

But she cautions others against trying similar stunts. “Do not push bears. Don’t do what I did, you might not have the same outcome,” said Hailey.

Saxon is a prolific writer with passion for the unusual. I believe the bizarre world is always exciting so keeping you up to date with such stories is my pleasure
Previous Onlookers Stunned After Spotting Couple Having Sex In Hotel Window During Religious Festival (Viral Video)
Next Viiral Video of London’s New See-Through Skyscraper Pool Scares Twitter Users 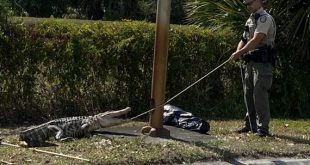