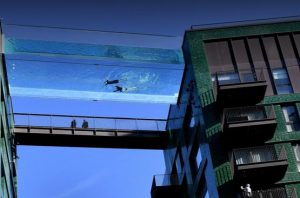 This should be fun but it’s definitely reserved for only the brave. I doubt whether too many fishes in the real ocean would even have the guts to swim in this scary sky scraper pool.

A see-through pool set 115 feet in the air between two London skyscrapers is definitely making a big splash online, but Twitter users found a way to throw cold water on it.

The Sky Pool at the Embassy Gardens apartments is the world’s largest floating acrylic pool ― 82 feet long, 46 of which are suspended in midair, according to the Robb Report.

Residents can swim from one side to the other and see the street 10 stories below.

The Sky Pool was officially opened to residents earlier this month, but it really made waves on Twitter Tuesday morning after the BBC posted video of it.

Swimmers enjoy warm weather in London at the Sky Pool which is believed to be the world’s first transparent pool built between two skyscrapers
https://t.co/mtRX8qvt0a pic.twitter.com/2skTGK9Jp7

While many people thought the Sky Pool was awesome, a lot of responses suggested a fear of heights combined with a fear of drowning, to the tune of “Hell, no!” Below are some reactions from twitter users.

Not in a million years https://t.co/PzXztjqJ8U

Of course I'd get in that pool… and sit right on the steps the whole time. https://t.co/lHBIBWjJ6W

Just going to be honest. I'd poop in this pool if you made me swim across it. I'd be so frightened that is what I'd do. It would be like the scene in Caddyshack, but it wouldn't be a Baby Ruth. It would be human poop. https://t.co/G1cEMIwh6g

This is absolutely just a scene from the opening of a disaster movie about earthquakes, right? https://t.co/LKN9VKTgtB

Saxon is a prolific writer with passion for the unusual. I believe the bizarre world is always exciting so keeping you up to date with such stories is my pleasure
Previous Watch Shocking Video As Teen Pushes Bear Off Wall To Save Her Dogs
Next Watch! Scary Moments Seven Bears Crashed A High School Pool Party