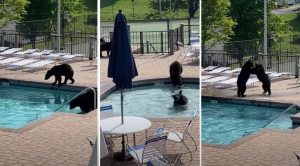 They were definitely not invited but seven of them appeared from no where, stole the show … and kept it to themselves.

A high school pool party in Tennessee last weekend got a lot wilder after a crew of black bears showed up.

“The [Junior Reserve Officers’ Training Corps] swim party had a few visitors…7 bears,” wrote Michelle Johnson on her now viral YouTube video. “We were safely outside the pool area.”

The video shows the bears exploring an outdoor area at Chalet Village in Gatlinburg. They splash around in three different pools, stroll across the adjacent tennis court, and at one point, two of them engage in a bit of roughhousing. (Local news channel WBIR noted that those bears “obviously didn’t read the pool rules about not horsing around.”)

Johnson noted on YouTube that black bears are common in the Great Smoky Mountains and urged humans to be “be respectful, keep your distance, and don’t feed them.” (Excellent advice.)

When the weather starts getting hotter, bears are often drawn to pools. These party-crashing animals might have drawn inspiration from a particularly fun-loving bear who went viral in 2018 after nabbing a man’s margarita, chilling in his unheated Jacuzzi, and then passing out for a nap.

Saxon is a prolific writer with passion for the unusual. I believe the bizarre world is always exciting so keeping you up to date with such stories is my pleasure
Previous Viiral Video of London’s New See-Through Skyscraper Pool Scares Twitter Users
Next Viral Video! Brazilian Man Dressed As Superman Gets Hit By Bus He Was Pretending To Stop