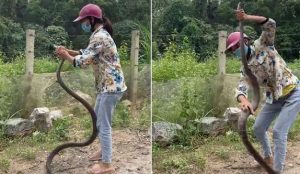 The faint-hearted cannot watch this video to the end.

This woman appeared unfazed as she captured a huge snake with her bare hands.

Footage that has surfaced online shows the woman successfully catching the snake and walking away with it coiled around her waist – a sight that’s enough to give goosebumps to anyone scared of serpents. The footage was filmed by onlookers in Vietnam who came across the woman and decided to record her in action.

“We were on the street when we saw this woman trying to catch a big snake. We decided to stop to record this moment. It looks dangerous,” the onlookers were quoted as saying by video licensor ViralHog.

In the 48-second clip, the woman is seen wearing a mask on her face and a helmet on her head. Her hands, however, were bare as she handled the squirming snake. After a struggle of a few seconds, the woman managed to subdue the reptile. She was then filmed walking away with the snake coiling itself around her waist and shoulders.

In the comments section on YouTube, many agreed that the woman was far braver than them. “I could never,” declared one viewer. “See, I love snakes and I want to do this. I just kinda don’t have enough courage to do it yet,” another said.

Saxon is a prolific writer with passion for the unusual. I believe the bizarre world is always exciting so keeping you up to date with such stories is my pleasure
Previous Viral Video! Brazilian Man Dressed As Superman Gets Hit By Bus He Was Pretending To Stop
Next Dramatic Rescue! Car Swept Away In Flood, Woman Clings To Tree (Video)