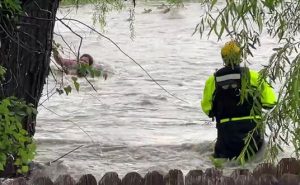 A video of the heroic rescue of a woman, whose car was swept away by floodwaters in Texas, US, has gone viral on the internet. The woman got stuck in the stream after a heavy torrent of rain hit the Fort Worth area on May 24. She tried to drive through the aggressive stream in her car but it got swept away. She jumped out of her car and managed to grab hold of a tree. The video shows a rescue official trying to throw a rope at the woman, who is neck-deep in water, to allow her to swim across to the bank.

According to the description in the video, the woman had jumped out of her car but got stuck in the middle of the stream. She is seen holding onto a tree branch to remain afloat. However, soon the rescue official manages to reach her with a rope. The woman is then given a life jacket. And the official ties the woman to himself and prepares to swim back to the bank.

The stream is so aggressive that they barely manage to keep their balance and struggle to remain afloat. They gradually managed to get out of the stream safely.

The hair-raising video is a little over a minute long and was filmed by local resident Howard VanCleave.

An NBC Dallas-Fort Worth report said the woman was “not hut but was a little shaken up”. The rescue officials received and responded to several other highwater calls, but this was the only one where someone had to be rescued. Most people were able to get out of their cars themselves.

Saxon is a prolific writer with passion for the unusual. I believe the bizarre world is always exciting so keeping you up to date with such stories is my pleasure
Previous Woman Stuns Internet As She Catches Huge Snake With Bare Hands (Video)
Next Close Shave For Bike Rider As Iron Gate Nearly Falls On Him (Viral Video)